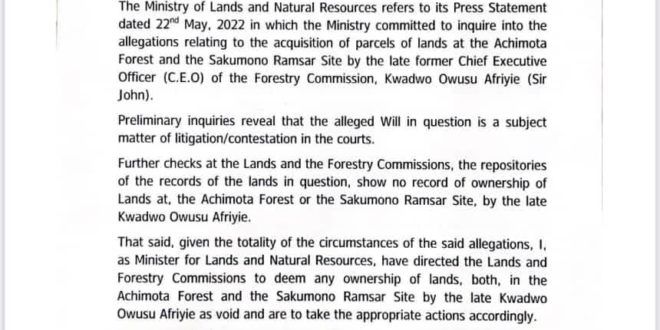 Ghana’s Ministry of Lands and Resources has announced that government has taken over the Achimota lands bequeathed to the family of the late Kwadwo Owusu Afriyie, popularly known as Sir John.

Until his demise, Sir John was the CEO of the Forestry Commission.

The Will of the late Sir John which went viral on Monday May 23rd 2022 revealed that the NPP guru who died in July 2020 allegedly owned some lands in the Achimota Forest and had bequeathed the said lands.

In the alleged Will sighted by TodayGhanaMedia.com.com, Sir John named his children and some individuals related to him as the ones the lands should be given to forever.

The will also stated in the will that he owned land at the Ramsar area in Sakumono in Accra.

After the will went viral, the Ministry of Lands and Natural Resources stated that it will investigate the said lands in the list.

In a latest development, the Ministry of Lands and Natural Resources has revealed that the repositories of the records of the land in question show no record of ownership of the lands both in Achimota Forest and Sakumono Ramsar site.

“The said land, given the totality of the circumstance of the said allegation, I as Minister for Lands and resources, have directed the lands commission to deem any ownership of lands both in Achimota and Sakumono  Ramsar site by the late Kwadwo Owusu Afriyie as void and are to take the appropriate actions accordingly,” the statement from the Ministry said.