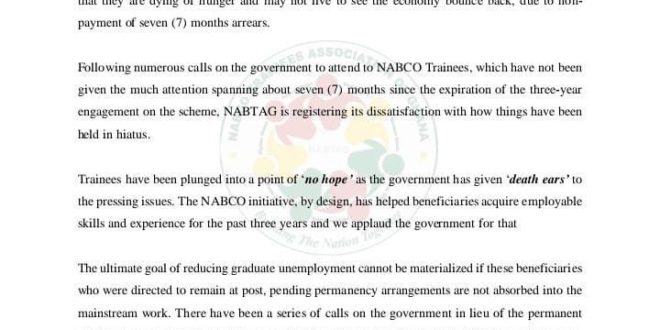 We Are Dying Of Hunger – NABCO Trainees laments

The NABCO Trainees Association of Ghana (NABTAG) says the non-payment of their seven months arrears by the government is making life unbearable for them.

According to the Association, they may die out of hunger before the economy bounces back for their payment to be made.

“The ultimate goal of reducing graduate unemployment cannot be materialized if these beneficiaries who were directed to remain at post, pending permanency arrangements are not absorbed into the mainstream work.

“There have been a series of calls on the government in lieu of the permanent employment arrangement but to no avail. The current situation is disturbing beyond measure coupled with almost seven months of arrears,” the President of the Association, Dennis Opoku Katakyie disclosed in a statement dated May 23, 2022.

He continued: “The situation on the ground is not reflective of the promise made to invest in the youth through job creation. We are asking the government this simple question: although we have been told of the soon-to-come arrears/permanent arrangement, until when?”

Attached is the full statement