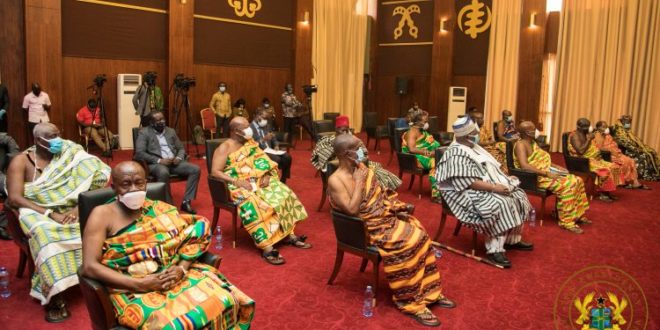 The Omanhene of Kenyasi Number One in the Ahafo Region, Nana Osei Kofi Abiri, has served notice that he will not hesitate to destool any chief within his jurisdiction found to be involved in illegal mining, otherwise known as galamsey.

According to him, that Chief would also lose his stool if he is found to engage in any form of illegal mining that has the potential of destroying water bodies and farmlands.

Nana Osei Kofi issued the stern warning at the inauguration of the Kenyasi Community Mining Scheme in the Asutifi North District in the Ahafo Region aimed at providing employment for the youth and also help protect the water bodies that serve as sources of drinking water.

The inauguration of Community Mining Schemes across gold mining areas in Ghana is a strategy initiated by the government to address the menace of illegal mining in Ghana, which has been a major source of destruction to the river bodies and degradation of lands for commercial and subsistence agriculture.

Besides, the youth, who are mostly involved in illegal mining activities, also lose their lives in the course of their operations.
The chemicals used are also poisonous to the environment. The involvement of chiefs in illegal mining has been in the media recently because the lands where such activities go on are always under the jurisdiction of a chief.

Officials of the Ministry of Lands and Natural Resources met with Nananom, Metropolitan, and District Chief Executives in some selected mining districts in Ashanti on how best the menace could be addressed in view of the intensity of the problem.

For his part, the Deputy Minister of Lands and Natural Resources, George Mireku Duker, who inaugurated the scheme, said the government will continue to ensure that those arrested for illegal mining are prosecuted to deter people from engaging in it.

He said the government has purchased boats to be used to patrol the major rivers that are a threat to survival and promised that more mining schemes would continue to be inaugurated to provide employment for unemployed youth.

Also, the Ahafo Regional Minister, George Boakye, appealed to the management of the mining scheme to strictly comply with regulations to protect the environment.