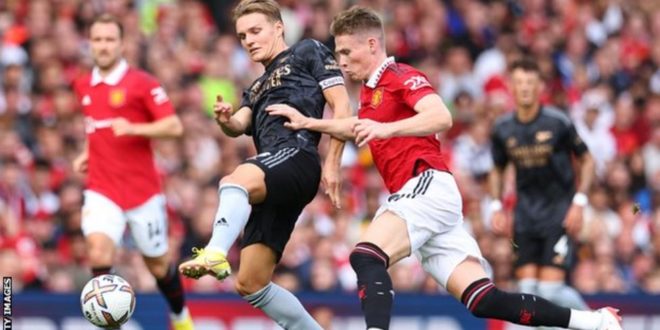 Manchester United earned a thrilling victory as Antony scored on his debut and ended Arsenal’s winning run this season with an intense game at Old Trafford.

The Gunners had won all five of their games so far and United have now won their last four on the spin.

But United’s £82m signing from Brazil was clinical when his opportunity came, curling his shot around goalkeeper Aaron Ramsdale against the run of play.

Arsenal got back on level terms when Jesus lost control of the ball in the box and it fell to Bukayo Saka, who comfortably turned it home before Bruno Fernandes picked out Marcus Rashford with a sublime pass six minutes later and the 24-year-old calmly finished his shot.

Mikel Arteta’s side seemed to still be in control until Rashford got his second of the game – a clinical finish from a speedy counter-attack.

Previous Where Is COLA For The Private Sector Workers ? – INSTEPR Asks
Next Hive Donates Another Borehole To Pentecost High School At Bremang