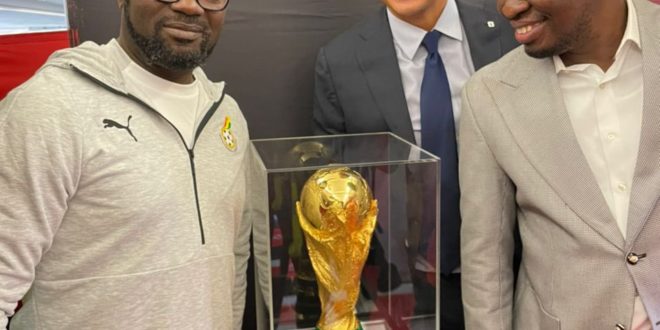 The 2022 FIFA World Cup trophy has landed in Ghana for the football fanatics to have a sight and experience of the most coveted prize as it visits all 32 FIFA World Cup qualifying nations for the first time.

The trophy arrived in the country on Saturday, September 3, 2022, for a two-day tour led by French Legend   David Sergio Trezeguet.

Led by former winner David Trezeguet, the delegates were warmly welcomed by an organized group of football executives and fans, excerpts from the scene suggest.

The trophy will be displayed to the public on Sunday with fans of the Black Stars having the chance to take photos with the golden trophy.

Ghana has been drawn in Group H of the 2022 FIFA World Cup which will be staged in Qatar from November to December.

The Black Stars of Ghana have been paired alongside Portugal, Uruguay and Korea Republic in the Group H of the FIFA World Cup.

See also  Ghana’s Mohammed Kudus Picks Up Another MOTM Award After Brace In Ajax Win
In photos posted on social media, the golden trophy is covered in a glass case and well guarded by security.

The World Cup is home — Black Stars we go do 🇬🇭 pic.twitter.com/8ynBZ0wbPA

Come and See ooo 🎼 — The World Cup is in 🇬🇭 pic.twitter.com/eVd5Z7zHNA

After having a first look at the Fifa World Cup trophy on the plane, Pastor Sammy of Action Chapel asked to say a few words to the Cup.