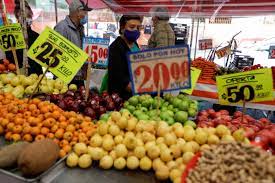 The UN’s Food Prices Index has fallen for the fifth month in a row, in a sign that one of the main pressures pushing up the cost of living around the world could ease.

The index fell to 138 in August and is now lower than it was before Russia’s invasion of Ukraine. The countries were both major exporters of crops including sunflower oil, corn and wheat.

That has meant more supplies have been able to reach international markets.

The FAO’s Erin Collier told the BBC that “prices came down for a mix of reasons”.

Cereals have been the “main driver” of this year’s growth in food prices, but Ms Collier explained supplies are now increasing because “the harvest looks a little bit better, especially in Canada, the US and Russia”. All three are major exporters of wheat.

See also  Richest Countries In The World: Ghana Is No. 3 Globally, 1st In Africa – Fact Check

Indonesia’s temporary reduction in export taxes on palm oil has meant food manufacturers have had more options for the vegetable oils they use in huge quantities.

The cost of food has been one of the biggest contributors to inflation around the world.

This week the Eurozone reported inflation was running at an annualised rate of 9.1% in August. Energy was the biggest contributor with increases of 38.3% but unprocessed food was next at 10.9%.

The most recent inflation figures from the UK and the US paint a similar picture.

The FAO index, a closely watched barometer, also showed that there were falls in the cost of its other food categories: dairy, meat and sugar. It said beef and other bovine product prices “declined on weak domestic demand in some leading exporting countries”, perhaps reflecting that consumers are switching to cheaper alternatives.

“Growing concerns of a recession have led to fears that demand for foods like corn, meat, vegetable oils and other products will fall”, according to Kona Haque, head of research at the agricultural commodities firm ED&F Man.

However, because of ongoing supply chain problems and the time it takes for price change to filter through, Ms Haque said that not all countries will feel the benefit of these lower prices immediately.

The FAO index has fallen sharply from March’s record high of 159.7 but remains 10 points above where it was a year ago. Price volatility has increased according to Ms Haque, who cited recent heatwaves in Europe and floods in Pakistan as examples of the increasing influence of extreme weather on crops prices.

More challenges ahead
This week Ukraine’s agriculture minister Mykola Solsky warned forthcoming harvests would suffer because of the war. The area for planting wheat and barley for next year’s harvest is set to fall at least 20% because of the Russian invasion. The Ukrainian Agrarian Council also says a lack of funds will lower production.

Ms Collier cautioned that even after these recent falls global food prices remain higher than during the 2011 peak.

“There’s a lot of factors at play right now that are still keeping prices high,” she said. Those include soaring energy prices which mean that fertiliser remains very expensive for farmers, as well as “supply uncertainty”.

“Even though [some of] Ukraine’s ports have opened that remains a very tentative situation, and the volumes are still quite small. We need to see those volumes increase to help bring prices down more”.