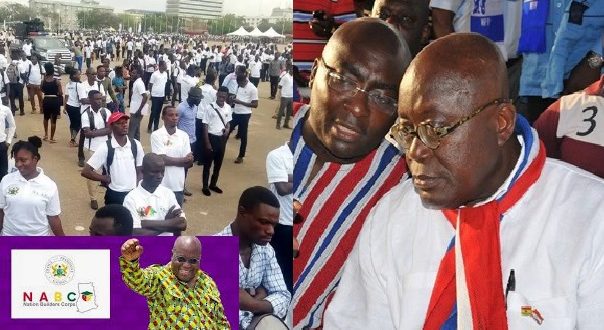 A Deputy Communications Officer of the governing New Patriotic Party (NPP) Kamal Deem Abdullai has said trainees under the Nation Builders Corps (NABCO) have the right to demand what is due them as far as their arrears are concerned.

In his view, even if they are owed one month, they have the right to demand for the payment.

“I am putting myself in their shoes and I empathize with them, they have the right to demand that the government pays them and government must do the needful,” he said on the New Day show with Johnnie Hughes on TV3 Friday September 2.

“Where I have a problem is that, even if the NABCO trainees are owed one month, they have the right to demand what is due them,” he stressed.

He further indicated that the government had good intention for introducing the programme.

“They should also understand that it was for good intention that the government of the NPP brought the NABCO initiative,” Kamal said.

The initiative came to an end on Thursday, September 1, 2022.

This was announced earlier by the Finance Minister Ken OPfori Atta.

Presenting the 2022 budget statement to Parliament on July 25, Mr Ofori-Atta said “Mr. Speaker, our iconic Nation Builder’s Corps (NaBCo) programme, which was initially to run for three years and extended for an additional year, will be completed by 1st September 2022. The programme which engaged a 100,000 young graduates has prepared thousands of them for the world of work. So far we have invested approximately GH¢2.2 billion,” the Finance Minister told Parliament.

Mr Ofori-Atta added that “As they exit, the current cohort on the programme are encouraged to take advantage of the YouStart initiative and other existing programmes in our drive to build an entrepreneurial nation.”

Kamal Deen further indicated that the government has no apology to render for ending the programme.

“Let us come and apologize sincerely to them for the non payment of the salaries but government owes no one apology for ending the programme,” he said.