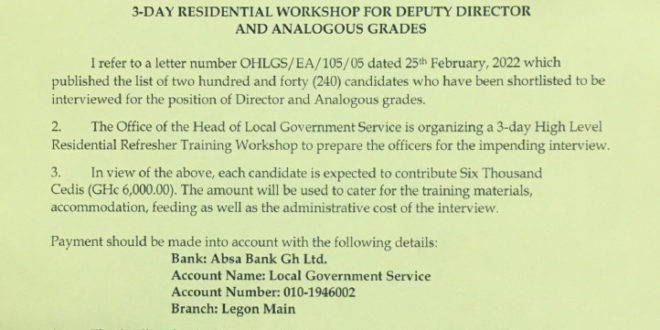 Commission on Human Rights and Administrative Justice (CHRAJ) has begun a probe into the Local Government Service’s demand that staff due for promotion should pay GHc 6,000 for a promotion interview training.

The Fourth Estate published the story on March 9, 2020, highlighting the seething anger within the Local Government Service after 240 of its staff due for promotion were directed to pay the monies into an Absa Bank account by Wednesday, March 23, 2022.

The letter said the money was meant for organising “a 3-day High-Level Residential Refresher Training Workshop to prepare the officers for the impending interview”.

“The amount will be used to cater for the training materials, accommodation, feeding as well as the administrative cost of the interview,” the letter explained. 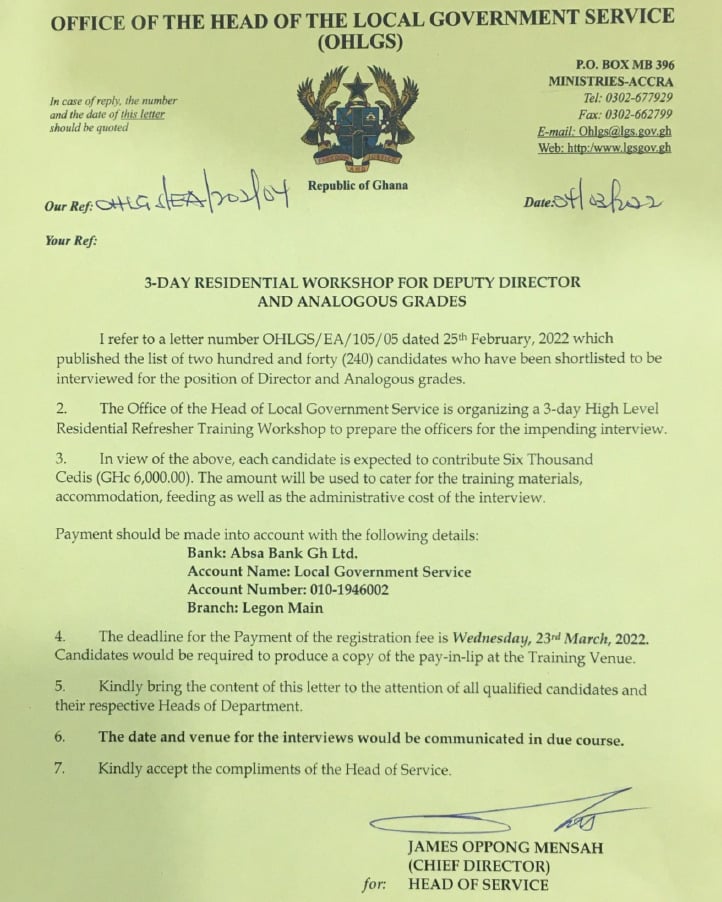 Justifying the directive, the Chief Director of the Office of the Local Government Service (OLGS), James Oppong Mensah, told The Fourth Estate that said it was a practice within the OLGS.

He noted the directive was not compulsory.

The Fourth Estate petitioned CHRAJ on April 19, 2022. The petition, signed by Editor-In-Chief, Manasseh Azure, asked the independent anti-graft body to declare that the charges constituted “an abuse of the rights of the workers who, out of desperation for promotion, are compelled to pay such huge amounts.”

The Fourth Estate also asked CHRAJ to declare that the practice reportedly dating back to 2007 was “an extortion by the OLGS in the midst of economic hardships and the rising cost of living,”. It added that the demand for money was “ an administrative injustice meted out to staff of the Local Government Service.”

CHRAJ is empowered by law to “investigate complaints of violations of fundamental human rights and freedoms, injustice and corruption, abuse of power and unfair treatment of persons by public officers and to provide for related matters.”

The Commission has begun investigation into the case.

Less than 24 hours after the publication and the uproar that followed, the Office of the Local Government Service announced that it had suspended the controversial directive.

“Following concerns raised by some staff, the Head of the Service has directed an immediate suspension of the workshop,” the Chief Director said in a circular.

It however said, “a new date would be communicated to applicants after a broader consultation on the matter”.

But The Fourth Estate understands that despite the suspension, the directive is being quietly enforced or adhered to by some members.

It has evidence showing that in Sunyani, some Local Government, are complying.