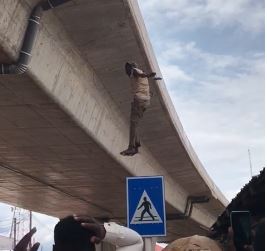 Information reaching TodayGhanaMedia.com  indicates that a middle-aged man believed to be mentally challenged has fallen off the Tamale interchange in the Northern region.

The incident which occurred on August 29, 2022, resulted in the victim sustaining severe injuries and has been admitted to the hospital for treatment.

In a viral video sighted by TodayGhanaMedia.com , saw the victim jump from the top of the interchange and fall on the bare floor.

The reason for his action is not immediately known but some witnesses believe he might have attempted suicide.

It will be recalled that after the commissioning of the Tamale interchange, the Northern Regional Commander of the Motor Traffic and Transport Department (MTTD), Chief Superintendent Mahmud Yussif, warned residents of the Tamale metropolis and its environs that the newly constructed Tamale interchange was pedestrian-unfriendly.

According to him, residents will be risking their lives should they refuse to desist from using the overpass of the interchange.

“Looking at the nature of the project it is pedestrian-unfriendly and completely not meant for pedestrians only for vehicles. Even our motorbikes are not allowed to use it, it was constructed to ease traffic in the central business district.”

Information gathered by DGN Online suggests that children have started using the overpass of the interchange as a playground.

Some residents have called on the Motor Traffic and Transport Department (MTTD) to deploy personnel to the Tamale Interchange to prevent pedestrians from using it to avoid any disaster.