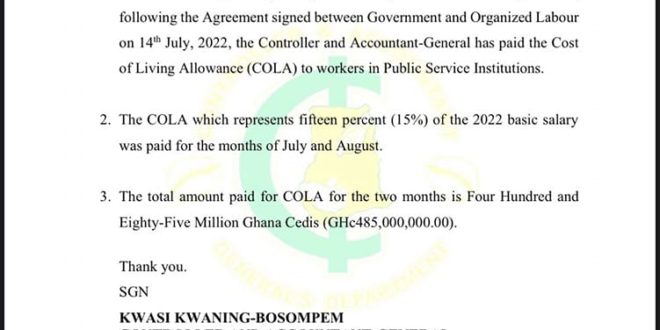 This is contained in a statement a copy to TodayGhanaMedia.com issued by the Controller and Accountant-General’s Department (CAGD) dated August, 29, 2022.

The release said, “Pursuant to the approval given by the Ministry of Finance on 1st August 2022, following the Agreement signed between Government and Organized Labour on 14th July, 2022, the Controller and Accountant-General has paid the Cost of Living Allowance (COLA) to workers in Public Service Institutions.”

It would be recalled that during the May Day celebration this year, the Trades Union Congress (TUC), called on government to give public sector workers a 20% cost of living allowance (COLA).

According to the TUC, this will help better the lot of public sector workers across the country owing to what they said, is the prevailing hardship in the country.

Subsequently, some public sector workers threatened to withdrawal of their services if government did not pay the COLA.

The strike action was averted following a meeting of the tripartite committee which agreed on 15% COLA effective July 1, 2022.

According to the statement issued by CAGD, “The COLA, which represents fifteen percent (15%) of the 2022 basic salary was paid for the months of July and August.”