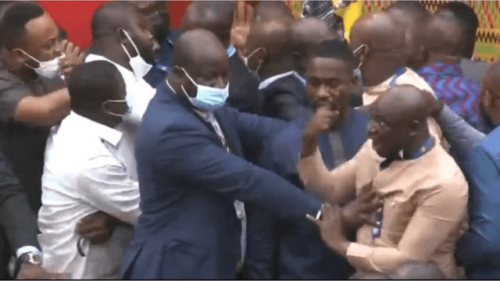 Ghanaians have been asked to brace themselves for more fisticuffs in parliament in the coming days over a Constitutional Instrument that seeks to give power to the Electoral Commission to accept only the Ghana Card as a source document for voter registration.

According to member of parliament for Bongo Constituency, Edward Abambire Bawa, such a move will be resisted forcefully in a fashion worse than the violence that broke in parliament over the passage of the Electronic Transaction Levy.

“The bigger fight is yet to come in parliament with that obnoxious CI that they plan to use only the Ghana Card. Mark my words, if the EC and the majority make an attempt to table that CI, we may not have a parliament again. This is about the destiny of our people because when you have a situation where people think impunity is a matter of right, you must face them with all available weapons that you need, and when I say weapons, I don’t mean just using guns but if it demands that we have to defy every bit of our soul and our own dignity, our civic behavior and ensure that impunity stops, we will do it. And I am telling you that if you saw anything in E-levy and you think that was tough, I think it will be worse when it comes to the CI,” he said on Dreamz Fm in Bolgatanga.

“If you want, just pass by the GRA office just by my house and see how people are queuing just to get the Ghana Card. Meanwhile, there are certain regions for example Ashanti region and eastern region where they have no issues when it comes to the Ghana Card and if you want to look at the logic of population, Greater Accra is the most populous but they have issues just like Upper East,” he added.