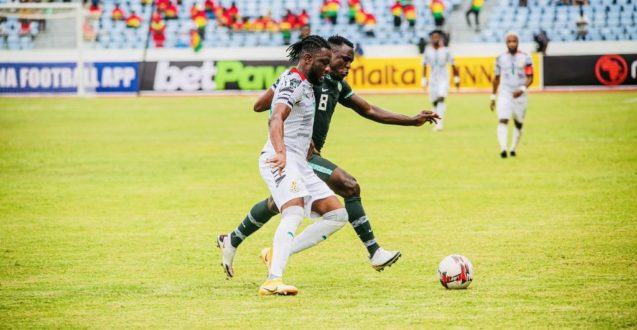 The Black Galaxies of Ghana secured a first-leg advantage over Nigeria in the final round of qualifiers for the 2023 CHAN tournament on Sunday, August 28.

Goals from Daniel Afriyie Barnieh and Seidu Suraj ensured Annor Walker’s side earned a 2-0 victory at the Cape Coast Stadium.

ICYMI: A well-worked goal from the Black Galaxies to seal the deal in Cape Coast. Suraj Seidu with the finish. 👏🏾

Having played a friendly game against Qatar prior to this game, the Galaxies had a promising start to the encounter but had very few chances in the opening 45 minutes to cause damage.

However, the scene was quite different after the break with Ghana winning a penalty after the ball came off the hand of a Nigerian defender in the 18-yard box.

⌚️ 𝗙𝗨𝗟𝗟 𝗧𝗜𝗠𝗘 ! It’s all over at the Cape Coast Stadium.

Barnieh stepped up to take the resulting spot kick, sending the goalkeeper the wrong way to open the scoring.

It was the third goal the Hearts of Oak player had scored in the qualifiers after scoring twice in both legs against Benin in the previous round.

With four minutes to go, the Galaxies doubled their lead, this time Suraj tapped into an empty net from close range after the goalkeeper had saved his earlier effort.

The 2-0 now means Nigeria will have to score three unanswered goals when both teams face each other again in the return encounter in Abuja on September 3, 2022.

The Black Galaxies are hoping to return to the CHAN tournament to be hosted in Algeria next year after a long absence.