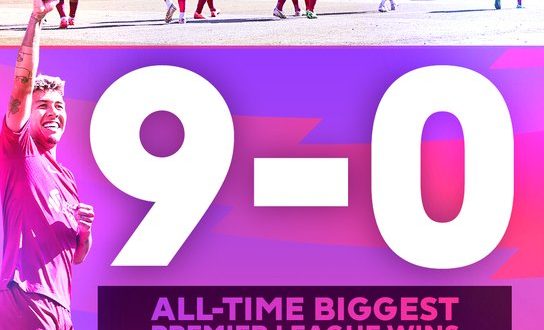 Manager Jurgen Klopp had described the beginning to his side’s campaign a “false start” after two draws and Monday night’s defeat at Manchester United, but the Reds responded in stunning fashion.

Manchester United have achieved that margin of victory twice, against Ipswich in 1995 and Southampton last year, and Leicester City did likewise against the Saints in 2019.

Liverpool got off to the perfect start with two goals in the opening five minutes against the Cherries to set a raucous Anfield rocking.

Luis Diaz rose to head home and Harvey Elliott curled in his first top-flight goal with a sublime strike from outside the box.

Full-back Trent Alexander-Arnold thumped a long-range shot into the top corner, with all three goals assisted by Roberto Firmino.

The Brazil forward went from provider to scorer on the half-hour mark when he acrobatically converted from inside the six-yard box and Virgil van Dijk headed in the fifth from a corner – all before half-time.

It went from bad to worse for Scott Parker’s men in the first minute of the second half when Chris Mepham stretched to divert the ball into his own net and Firmino poked home the seventh of the afternoon.

Summer signing Fabio Carvalho volleyed in with eight minutes left for number eight and Diaz headed in the ninth to complete an incredible, historic win.

For Bournemouth, the rout was their third consecutive league defeat without scoring a goal after beating Aston Villa in their opening game.