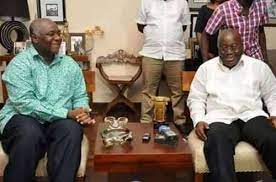 A leading member of the New Patriotic Party (NPP) and a former Member of Parliament for Mampong constituency, Hon. Francis Addai Nimoh has lamented over the neglect by the Akufo-Addo led government after his name has not appeared in the appointment list.

Speaking to Kwaku Dawuro on Movement In The Morning Show,  Hon. Addai Nimoh expressed his pain over the lack of reward for his tremendous contributions in the party.

“I have not received any form of appointment since 2016. I am not a new face in the party, and although I wish for an appointment, there is nothing I can about it. As human, I sometimes fell hurt and neglected. I have a lot of experiences and getting the opportunity to serve 30 million plus people is a big privilege and is worth it. The nation has invested in me and I know I can serve which will also benefit my children and my entire generation”.

The NPP Presidential Candidate hopeful  stated that, he sometimes fell hurt and neglected because he have a lot of experiences and getting the opportunity to serve 30 million plus people is a big privilege.

He said that, he will be happy if president appoints him as one of his ministers.

He stated that, he is in support of those calling on the government to reshuffle some of his ministers.

He added that, calling for reshuffling doesn’t mean he hates someone but for the development of the country and fresh ideas.