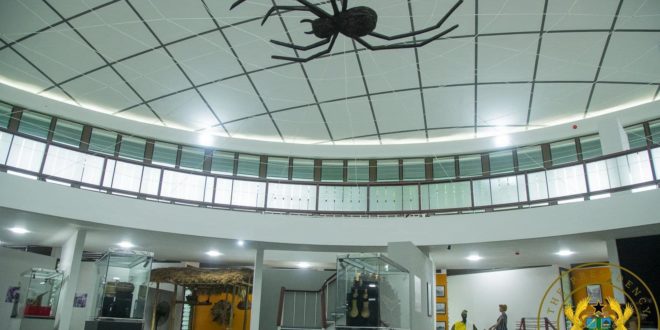 The refurbished National Museum Gallery in Accra has bounced back since its reopening last June, with 14,145 visitors trooping to the facility between June 10 and July 31, 2022.

Until now, the facility, which had not seen any major refurbishment since it was first opened in 1957 to commemorate

Ghana’s Independence Day, hardly attracted visitors, with the managers saying “it was nothing to write home about,” when asked about the figures for attendance in the past.

The gallery, located on the premises of the Ghana Museums and Monuments Board in Adabraka, Accra, was closed down for refurbishment in December 2015, but work stalled along the line, and only resumed this year after the government committed to complete it as part of efforts to promote tourism in the country.

Since the facelift, the gallery has been enjoying patronage especially on Fridays, where patrons, including domestic and foreign tourists, researchers, educationists, students, tour guides and families visit to explore and experience art, creativity, and the shared humanity the gallery has to offer.

Among the items on display are objects of archaeology, fine arts, as well as ethnography; the scientific description of peoples and cultures with their customs, habits and mutual differences.

The Daily Graphic has also visited the museum to observe how it is being patronised.

Apart from the gallery and other exhibition areas, there are visitor-friendly facilities sited within the premises of the gallery such as washrooms and a restaurant which serves a variety of continental and local dishes at a fee.

For two Fridays that the team visited the museum, it observed how the museum has become, buzzing with activities as staff of the Ghana Museums and Monuments Board (GMMB) were busily seen welcoming visitors to the gallery.

On one of the days, two Metro Mass Transit buses with more than 120 schoolchildren on an educational tour arrived on an excursion.

A typical tour by a visitor which lasts between 45 minutes and two hours, starts with the museum educator welcoming his or her guest to the facility.

If the visitors are schoolchildren, they are put in groups of 20 before the tour starts.

The visitor is directed to the front desk of the gallery where a cashier and an official from the education department of the GMMB takes records of visitors.

The fee charged for the tour varies depending on the class of visitors.

A foreigner who is in high school or college pays GH¢ 8 and basic school children pay GH¢6 per child.

A Ghanaian adult needs to pay GH¢10 to be able to tour the gallery; tertiary students and volunteers pay GH¢4 per person, while senior and junior high students and primary school children are required to pay GH¢3 and GH¢2, respectively.

Entry is free for preschool pupils.

There are also charges for commercial and non-commercial filming and taking of photographs of the exhibits for special use upon request by a visitor.

The prices range from GH¢10 to GH¢10,000, depending on whether one is a Ghanaian or a foreigner and also, the purpose for the photograph.

Once payment is made, receipts are issued and the visitor is asked whether he or she wants a self-tour or a guided tour.

If it is a guided tour, a tour guide is then assigned and he or she takes the visitor to the gallery.

The tour guide briefs the visitors with a self-introduction and a summary of what should be expected during the tour.

The tour starts from the right hand side when facing the gallery at the entrance and ends at the left hand side. This is to enhance a better understanding of the storyline.

As the tour guide takes the visitor through the various story lines or literature behind each exhibit, all of which reflect the chosen theme for the exhibition: “Unity in diversity.”

During the tour, the visitor has an opportunity to ask questions for further explanation.

At the end of the tour, the visitor is encouraged to sign a visitor’s book as well as give a general impression about the gallery and the tour.

Depending on the visitor’s requests, he or she is further taken round other exhibits within the premises of the national gallery.

Others are three black and sleek looking Mercedes Benz cars, a limousine, two Nissan Patrols and a Toyota Land Cruiser. They all have their registration number plates removed.

At the sculpture garden section, the visitor is shown a statue of Dr Kwame Nkrumah, Ignatius Kutu Acheampong,

a military ruler, and Yaa Asantewaa, a Warrior Queen Mother of Ejisu in the Ashanti Empire. The entire tour ends at the 10 Ashanti Traditional Buildings section.

Some of the patrons the Daily Graphic interacted with praised the managers and curators of the GMMB for putting the place in shape to meet international standards.

Others were also impressed with the collection, particularly, the vehicles used by some former Heads of State of the country.

“As a child, I remember we came here a few times to tour the facility and were excited about it. However, as an adult, I did not find it attractive since the facility had not been well maintained.

“I’m impressed with what I have seen today and happy to bring my children to visit as well. Museums reflect our history and heritage and it is important that they are preserved to educate the new generation,” Papa Kofi Owusu-Mensah said.

To make the facility more appealing, some visitors also suggested that drama should be added to the activities at the place for performances such as the re-enactment of Ghana’s historical past to help market the country better.

“Occasionally, drama sessions should be organised on who we are as a people and how far we have come,” Daniel Quartey, a guest, suggested.

A Professor of English at the Oakland University in the United States of America, Professor Donovan Braud, described the exhibits in the gallery as “excellent”.

He said he discovered new things such as the “superb” Ghanaian paintings and artworks”.

A tourist from London, Jason Lake, described the gallery as “having loads of history and very informative”.

A group of student researchers numbering about 15 from the University of Ghana Business School, described the tour of the national gallery and the museum as a “wonderful experience”.

The students pledged to help market the place through various social media platforms.

The Executive Director of GMMB, Kingsley Ofosu Ntiamoah, said the board was having discussions with the management of the National Theatre to release some arts and cultural groups to stage performances at the national gallery on selected days at peak hours to entertain visitors.

“The future looks bright because we are adding a lot of things. Currently, we are using the compound as an event centre where people can book to hold weddings or have refreshments for their guests,” the executive director stated.

Mr Ntiamoah expressed optimism that with the level of patronage recorded in a month, the national gallery could help shore up revenue from the tourism sector.

He explained that President Nana Addo Dankwa Akufo-Addo and the Minister of Tourism, Arts and Culture, Dr Ibrahim Mohammed Awal, were taking the right steps to make tourism the biggest contributor to the country’s Gross Domestic Product.

In that regard, he said the GMMB was also doing its best to increase traffic, emphasising that the more tourists arrived, the more the economy would grow.

“We are on the right track and I must say with the kind of leadership that we have, including our board members, we should be able to take the right decisions and make a positive impact on the economy,” Mr Ntiamoah stated.

The director pointed out that museums around the world were not solely funded by governments but by individuals, corporate institutions and non-governmental organisations.

“Our cultural heritage is unique and all must come on board to promote and market it,” he further stated.

Mr Ntiamoah said efforts were underway to refurbish other public museums, adding that those located in Bolgatanga in the Upper East Region and Ho in the Volta Regional capital had been rehabilitated.

The Museum of Science and Technology at Adabraka and the Ussher Fort (Fort Crèvecœur) Museum of Slavery at James Town, all in Accra, have equally been rehabilitated and opened to the public.

Additionally, he said the forts and castles in the country, including the Cape Coast and Elmina castles, would be refurbished to enable them to become more attractive to rake in the needed revenues.

The Duchess of Kent, Princess Marina, inaugurated the museum when it was first opened to the public on March 5, 1957, as part of the country’s independence celebrations.