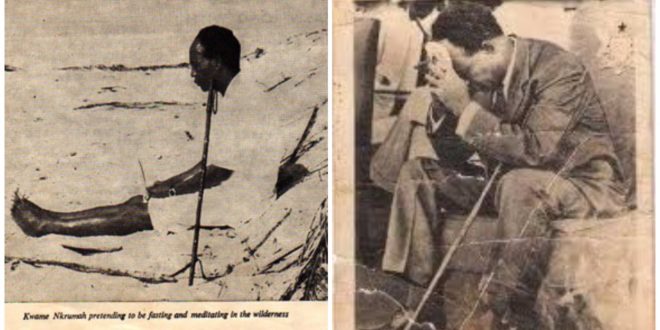 The coup was led by Lieutenant-General Emmanuel Kwasi Kotoka. “Operation Cold Chop” was its code name.

Kwame Nkrumah, who had led Ghana’s independence struggle and had won the hearts of Ghanaians later became unpopular among a section of his own countrymen and women.

Osagyefo on the day of the coup had left Ghana on [a] peacemaking mission to Hanoi over the Vietnam War, when the military took over his government.

A UK-based Independent Television News, ITN, report sighted by GhanaWeb, captured some Ghanaians jubilating because the ‘dictator’ Kwame Nkrumah had been overthrown.

From the video clip, Nkrumah’s statue had been pulled down, with kids stepping on his face.

Many Ghanaians gathered at the Usher Fort Prison in Accra waiting for their relatives who had been arrested by the then government to be freed. The prisoners were believed to have been opposition voices to Kwame Nkrumah’s government.

A citizen who was at the Usher Fort Prison waiting for his brother when asked by the reporter what he had against Nkrumah said, “because he has taken our money away; over 195 million pounds and we are now broke. We are fed up with him. My brother is in the prison yard now, I’m waiting for my brother. He has been detained for five years. [He was detained] for political reasons and I don’t know what he did wrong.”

Another said, “I am very happy.”

One of the prisoners, who was also a former Publicity Secretary of the banned United Party [UP], said, he was arrested on November 10, 1958, with the reason that he and his colleagues were planning the overthrow of the Nkrumah government at the time.

“The real reason was that this was the first time that you had a real opposition in Accra against the government party and they were afraid we were going to beat them in Accra and they must do something about it and the only way they could do this is to remove us from among the people. We were 42; actually, we were supposed to be 43 but one man was not arrested and another died while in detention in 1960,” he said.

“The treatment varied; at first, we were treated fairly well. Then in 1960, when the government decided that they have to break up our party in Ashanti – where we have strong and widespread support – they declared that some people were engaged in gangsterism and they were criminals, and when they arrested the people they turn out to be mostly members and officials of our party especially chiefs and traditional [rulers] in Ashanti who were chairmen of our party at various villages; they were treated very brutally. They were beaten up, some of them were more than 70 years with two or three who were more than 80; they were stripped naked and searched…,” he narrated further.

Speaking to the reporter on what his expectations are regarding free elections and when it will be held in Ghana Lieutenant General (retired) Joseph Arthur Ankrah, one of the leaders of the ‘Operation Cold Chop” coup said, “that is too early to answer, as you know, there has been a coup within this week and general election can only be carried out after we got the Constitution. With this constitution, we don’t want to have a dictatorship again. This Constitution will come out when everybody in the country has been given the privilege to bring about what he thinks must be embodied in the Constitution and the Constitution had been referred to a referendum and probably approved by the council.”

Transcript of Kwame Nkrumah’s speech about his overthrow:

Osagyefo Dr. Kwame Nkrumah in speaking about his overthrow and how detrimental it was to the progress and development of the country, considering everything that had been achieved after independence said,

“Fellow countrymen, my heart is heavy as I witness the damage which this click of neo-colonialist conspirators are doing to our country at the bidding of their overseas neo-colonialist masters, they’re dismantling the works of 50 years. They’re telling you that Ghana is bankrupt; they’re telling you that our country is in debt to the extent of some 240 million pounds. What fools they are! How ignorant for them to think that you believe these stupid lies.

“Open your eyes and look around you. See for yourself; see the splendid new Tema Harbour, see the mighty Volta Dam, and see the fine roads we have built under the leadership of the Convention People’s Party and its government. See the schools, the colleges and universities. See the hospitals and the facilities which we have created. See the factories which are already springing up. These are not debts; they are investments in our future as an independent nation.

“These are the physical guarantees of the bright, new future which I have promised you and I have been working for. Together, we can put our Ghana firmly and squarely on its own feet. Together, we can create the things we need ourselves instead of going cup in hand for charity handouts from foreign powers whose only wish is to exploit us and make us vassals to their interests.

“I know these are hard and trying days for you and I’ve never tried to conceal from you that real independence, that is to say, economic independence, does not come without hard struggles and sacrifice, unlike the cheats deceive us, the liars and traitors who are now trying to lord it over you, I have never promised you any easy road. I have respected your good sense, your capacity for work, your pride in yourself, and your sense of national dignity.

“Why do you think these traitors, these agents and (sic) of colonialism and of international intrigue to restore the independence of Ghana, chose this moment to perform their dastardly act? I will tell you. Less than one month before they struck to destroy all our hard work we had inaugurated, only three days before this treachery, we had signed a new agreement to irrigate the mighty Accra Drains. At last, we were on a threshold of a new victory; we had in 1957 won our political independence after years of struggle. Now in 1966, we were on the threshold of winning our economic independence.

“The same people who tried to sabotage our winning of political independence nine years ago, have now struck to sabotage our political independence and are systematically dismantling our socialist gains and achievements. Before the traitors and the rebellious National Liberation Council tried to shut power during my absence from Ghana, Ghana was heaven to which the oppressed from all parts of Africa, could come to carry on their struggle.

“It was heaven for freedom fighters, for independence and against colonialism. The name of Ghana was revered all over the African continent as a staunch friend of the oppressed. African brothers from South Africa, from Rudisha, from Mozambique and Angola, from so-called Portuguese Guinea and Cape Verde Islands, and other oppressed colonial areas were given hospitality among us. Do you think this is something of which we needed to be ashamed? Not at all. On the contrary, it was something of which we should be justly proud,” Kwame Nkrumah said.