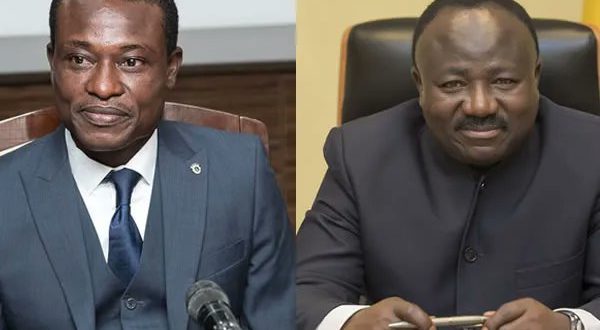 Special Prosecutor Slaps Former PPA Boss And Brother-In-Law With 18 Charges Over “The Contracts For Sale” Scandal.

The Special Prosecutor has charged the former chief executive officer of the Public Procurement Authority (PPA), Adjenim Boateng Adjei, and his brother-in-law, Francis Kwaku Arhin, with 18 counts of offences relating to their roles in “The Contracts for Sale” scandal.

The case was filed at the Criminal Division of the High Court in Accra on Wednesday, May 18, 2022. It is the first case Kissi Agyebeng has investigated and taken to court since assuming office as the Special Prosecutor.

Adjenim Boateng Adjei was busted in the “Contracts for Sale” investigative documentary produced by Manasseh Azure Awuni in 2019.

The investigation revealed that Mr. Adjei formed a company, Talent Discovery Limited (TDL), with his brother-in-law after his appointment as the CEO of the PPA.

He was a majority shareholder of 60% while his brother-in-law, Francis Kwaku Arhin, held the remaining 40% of the shares.

While Mr. Adjei was CEO of the PPA, Mr. Arhin was the CEO of Talent Discovery Limited.

The company won a number of government contracts through the restrictive tendering method. The contracts were approved by the PPA board of which Mr. Adjei was a member.

Talent Discovery Limited, the investigations found, did not have the capacity to execute the contracts. It then sold the contracts to individuals and companies without the knowledge or approval of the awarding entities.

An undercover agent who worked with Manasseh Azure Awuni in the investigation was made to pay a registration fee of GH¢5000 before TDL could deal with him.

The investigative team secured a number of contracts the company had won from ministries, departments and agencies and was selling to prospective buyers.

When Manasseh wrote to the company after the undercover work, TDL admitted the general manager sold the contracts but said he had not been authorised by the company to do so.

AB Adjei initially denied ownership of the company when Manasseh confronted him, but he admitted it on camera when he was confronted with evidence.

President Akufo-Addo suspended AB Adjei in August 2019 and referred him to the Commission on Human Rights and Administrative Justice (CHRAJ) and the Office of the Special Prosecutor (OSP) to investigate his conduct.

Investigations stalled when former Special Prosecutor, Martin ABK Amidu, resigned in 2020. His successor, Kissi Agyebeng, made the “Contracts for Sale” scandal one of his priority projects since assuming office.

Information available to The Fourth Estate indicates that Mr. Adjei and Mr. Arhin’s pleas will be taken by the court next week.

Meanwhile, information available to The Fourth Estate indicates Adjenim Boateng Adjei, has withdrawn all the money from his bank accounts that were frozen when investigations into his activities began.

Mr. Adjei was in office for two and a half years and more than GHc41 million was paid in cash into his Cedi, Dollar and Euro accounts.

In 2020, CHRAJ released its investigative report on the president’s petition. It found Mr Adjei guilty of conflict of interest and other offences.

CHRAJ banned Mr Adjei from holding public office for 10 years, which he appealed at the high court and lost.

CHRAJ also revealed that the total amount in Mr. Adjei’s accounts since he assumed office in 2017 stood at GH¢14.8 million.

“We find the Respondent’s [Mr. Adjei’s] explanation completely unsatisfactory and that he could not explain the source of the large volumes of excess wealth that passed through his bank accounts between March 2017 and August 2019 (unexplained wealth),” CHRAJ’s report said.

The Special Prosecutor at the time, Martin ABK Amidu, released a press statement in which he commended CHRAJ for its report.

“The only problem with the CHRAJ report is that for some reason it understates the amounts disclosed by the bank statements from the three bank accounts of Mr. Adjei exhaustively reviewed by the Auditor-General and this Office,” Mr Amidu said.

Both CHRAJ and the Special Prosecutor at the time said prior to assuming office, the amounts deposited into Mr Adjei’s accounts were insignificant when compared with what went into his account during his time in office.

Martin Amidu said, “I froze the bank accounts of all the suspects together with their legal entities.”

Information available to The Fourth Estate, however, indicates all the monies in the accounts have been withdrawn.

Our sources say, the freezing order expired and Mr. Adjei applied to the court to have it lifted. The sources say the OSP could not have kept the account frozen for more than 12 months without acting on the reason for which the account was frozen, for which reason the court could grant an extension.

The Fourth Estate’s sources further revealed that when Martin Amidu resigned from office in 2020, investigations into the “Contracts for Sale” scandal stalled.

In the intervening period between his resignation and the assumption of office of his successor, AB Adjei went to court and had the freezing order lifted.

He then proceeded to clear all the funds in the various accounts he held.

According to sources, other state agencies such as the Financial Intelligence Centre (FIC) could have frozen the accounts when the OSP’s order had expired. If this was done, the accounts would still remain frozen by the time the case was ready for prosecution.

The FIC, according to sources, is the body that could have flagged and dealt with the huge sums of cash deposits passing through Mr. Adjei’s accounts even if he was not involved in the “Contracts for Sale” scandal.

Facts to Be Adduced (1) by edwin appiah on Scribd 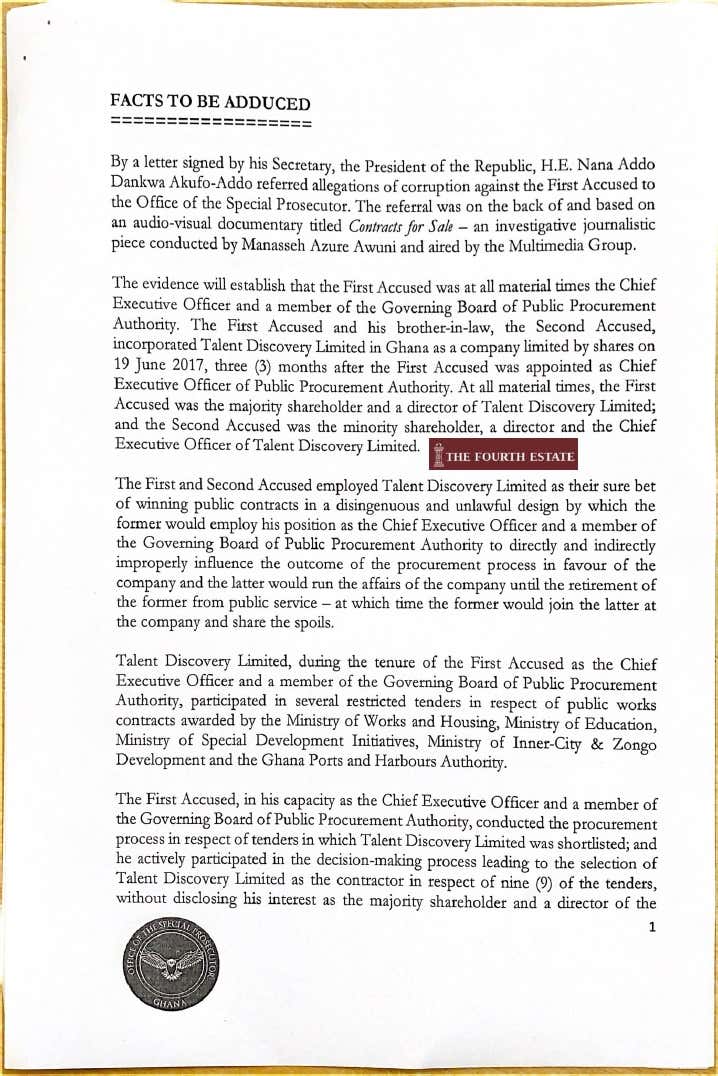 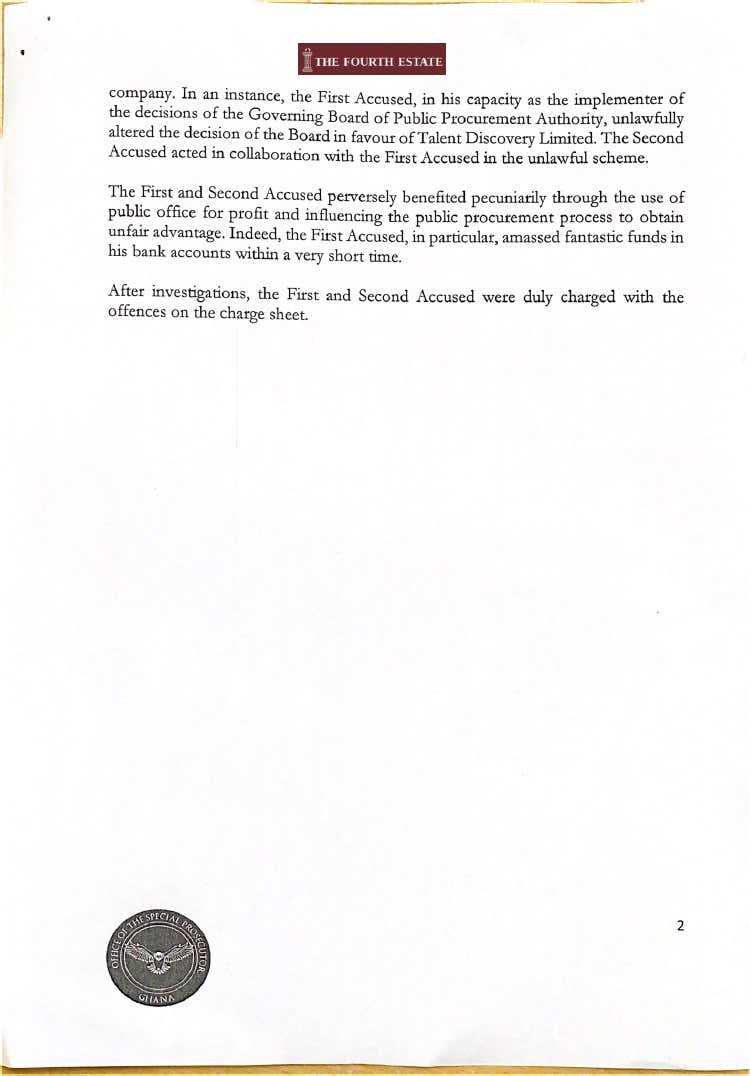