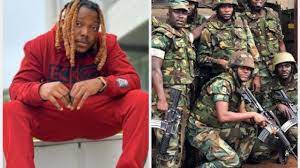 A Ghanaian musician,  Theo Versace  was stripped off his pants during an encounter with soldiers.

In a video that has gone viral, the up-and-coming singer, Theo Versace was seen surrounded by some military men after they saw him wearing military camo pants.

While standing by his car, they demanded he takes off his pants in the middle of the street.

The singer, who gave up his pants reluctantly, later got into his car and drove off after the encounter.

This comes after the Ghana Armed Forces (GAF) commenced a series of exercises to curb the unlawful sale and use of military-pattern uniforms and accoutrements following their continuous use by persons and institutions, who have not been permitted to do so.

See also  My Wife Threatened To Divorce Me – Appietus

They noted that the exercise is mostly targeted at people who use the uniforms to impersonate the military.

The GAF explained that the acts by such persons tarnish the image they have sought to build and also create a false sense of insecurity in the country.

“(The) GAF will not allow this situation to persist and will henceforth step up the arrests of these persons and deal with them drastically but in accordance with the due process of the law,” part of the statement read.

Previous Ghana Needs A Businessman As President; Our Problem Is Leadership – Fmr. Governor Of BoG
Next Berekum Chelsea Edge Out Medeama In GHALCA Top 6 Tournament 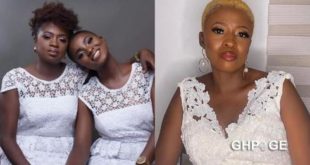 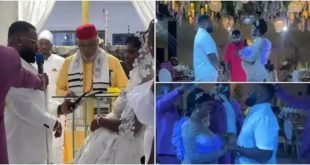