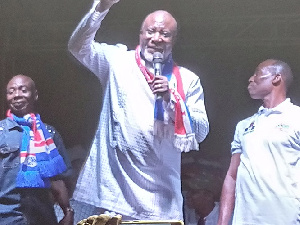 The immediate past NPP Parliamentary Candidate for Kpone-Katamanso Constituency, Hopeson Yaovi Adorye, has been summoned to appear before the party’s National Complaints Committee to answer questions over comments he made during the “Aduro Wo So Health Walk”.

Speaking at the walk in Kumasi, dubbed a “Walk for Alan”, Hopeson Adorye said that the vice-presidential slot of the party is an automatic slot for the Northerners in the NPP while that of the presidential spot switches between the Danquah and Busia lineages.

“If it went to Danquah, came to Busia, went back to Danquah, where should it go now, is it not Busia?” he asked.

Aside Hopeson Adorye and the member of Parliament for the Old-Tafo Constituency in the Ashanti Region, Ekow Vincent Essafuah has also been invited to appear before the National Complaints Committee over some comments he made that sought to advance the ambitions of one of the Party ‘s presidential hopefuls.

Additionally, the NPP said under the instructions of the National Steering Committee, Mr. Alen Kyerematen has been written to in respect of the “Aduro Wo So Health Walk” that was organised in his name.

In a press statement, the NPP said, “Further, comments made by some organisers of the Health Walk and other keynote speakers particularly, Mr. Hopeson Adorye, a member of the NPP, also breached the Party’s Code of Conduct and sought to divide the Party front.”

Subsequently, it stated that the General Secretary acting on the instructions of the National Executives, issued a press statement reminding members of the Party that the Code of Conduct was still in full force and urged all stakeholders to adhere to its provisions.

Unfortunately, it said the aforementioned did not adhere to the party’s code of conduct.

Meanwhile, in a bid to forestall such occurrences going forward, the NPP stated that the National Steering Committee has agreed that a meeting be arranged with all Presidential hopefuls of the Party to court their support and full cooperation in respect of their compliance with the Party’s Code of Conduct, assuring that arrangements are being made to that effect.

“We wish to further reiterate that the leadership of the Party is determined and committed to ensuring that activities of all Party executives or officers, individuals, groups, supporters and loyalists of the presidential and parliamentary hopefuls, do not breach the Party’s Code of Conduct for presidential and parliamentary primaries,” NPP stated.

It added that,”The Party wishes to further state that the institution and enforcement of these measures are not intended to aid the electoral advantage of any prospective candidate but to prevent tensions that often arise in the lead up to presidential and parliamentary primaries and secure a united Party front for the 2024 general elections.”

On 13th August the streets of Kumasi saw hundreds of persons taking part in a health walk to send a message to Mr Kyerematen that ‘Aduru ne so’ which translates as, it is your turn

Minister of Trade and Industry Alan Kyerematen himself has not officially declared his interest in contesting the NPP Flagbeararship race.