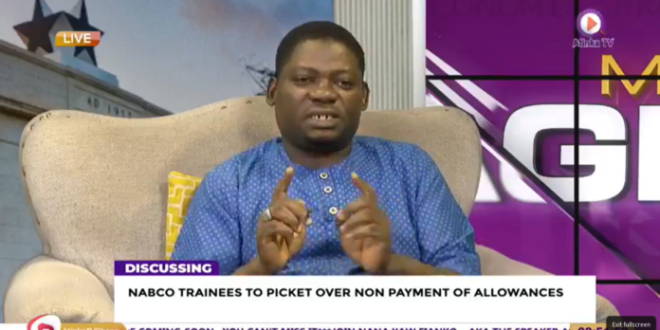 NPP Communicator Says, Govt Has Not Been Fair To NABCO Trainees

Jafaru Saeed Karian, a member of the New Patriotic Party (NPP) Communications Team  says it is unfair that the Government has not paid the Nation Builders Corps (NABCO)Trainees allowance for over nine months.

NABCO Trainees across the country have decided to picket in Accra on Thursday, August 18, 2022, starting from the Obra Spot at the Kwame Nkrumah Circle and end at the Black Star Square where they will submit a petition to the Vice President, Dr Mahamudu Bawumia.

According to them, they have not been paid their allowance since November 2021, hence their decision to picket.

They explained that the first phase of their contract was for three years which they were all paid.

However, after the three years, they were given an extension to remain at post but from November 2021 till date, the government has not paid them despite going to work everyday.

Speaking on Atinka TV‘s morning show, Ghana Nie with Ekourba Gyasi Simpremu, monitored by TodayGhanaMedia.com,  Jafaru Saeed Karian hinted that clearance has been given by the Finance Ministry to maintain those who are in the health sector, especially nurses, doctors and midwives, adding that most of them have applied for deployment, waiting to be assigned to the various regions.

He was sure that those who are assigned will be paid as expected due to the clearance by the Finance Ministry.

Meanwhile, he called on the Finance Ministry to settle the NABCO Trainees and enroll them on the YouStart programme in order to give them resources to start their own businesses.

“It is not fair that someone will work for two, three or four months without being paid. So, let’s call on the Finance Minister to make provision for the nine or 10 months that they have not been paid. Deal with these individuals, pay them off and then move them onto the main policy which you brought to help them,” he said

See also  No Chief Involved In Galamsey In Ashanti – Nkwantakesenhene

Previous Ghanaians Have Lost Trust In The NPP; Nobody Can Break The 8 For Them – Political Science Lecturer [Audio]
Next Majority Leader: Adwoa Safo Cannot Call Herself An MP Again