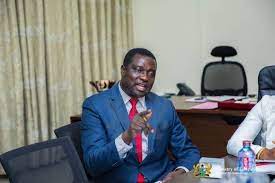 A standstill! That is the description of the state of Ghana’s first and second cycle educational system a few weeks ago, when teachers in basic schools and senior high schools (SHS) refused to go the classroom over their cost-of-living allowance (COLA).

Then, there was the food shortages in senior high schools (SHS) that drew attention to the dire food security situation in SHSs across the country. The heads of public SHSs, with almost empty food baskets in their kitchens, either threatened to shut down schools or begged parents for food.

Some reports were that some of the school heads decided to have a backdoor arrangement with parents to contribute GH¢1,000 to feed their children.

That was not all. Extra-curricular activities, including sports and the National Science and Maths Quiz, were suspended because of food shortage. All these mishaps were because of the burden on the state. The government is struggling to cope with shrinking expenditure in the face of the current economic crises.

There is little doubt that free SHS has opened access to thousands of Ghanaian children, who ordinarily would not have received secondary education. But there is a financial consequence to it, something the state appears to be struggling with.

Since September 2017, the government has spent GH¢7.6 billion on financing the free SHS, this includes US$390 (GH¢ 2.4 million) out of the $1.5-billion bond borrowed for the educational sector.

When the government launched the policy in 2017, it was with good intent. Unfortunately, good intentions without financial strength courts disaster.

Overtime, the challenges of the policy have manifested in many forms, including congestion, which has forced the government to start running a shift system, known as the double track system.

More than five years after the implementation of this policy, one would have thought that the government would think of a review.

A review does not mean cancellation. I wouldn’t want to go into the politics of it. A review can also mean allowing a greater private sector participation than we’re doing now.

I’m a strong believer in allowing the private sector to lead every aspect of our economy. Some years gone by, missions educated us. The footprints of these mission schools are all over the country. They were private initiatives that spurred the development of our human capital.

However, in 1954, the Convention People’s Party (CPP), led by Dr Kwame Nkrumah, took over the schools, placing their administration and management under state control.

The state intervention was because of managerial and resource deficits of the churches at the time. Today, the missions have expressed their willingness to retake that role.

Coincidentally in 2014, six decades after the takeover, the Christian Council of Ghana indicated that its member churches had the financial and managerial muscle to take over their schools.

Long before that, Dr Mary Grant, a former Minister of Education in the Rawlings administration, had recommended a return of the schools to the missions. During the dedication of the St Paul’s Lutheran School in Accra on September 17, 1999, she rallied the government to hand over mission schools in the country to the churches.

Being the head of Lutheran Mission at the time, I recalled her saying, “there is something special about mission schools, which got lost when the government took over the schools. However, presently, things are different, so they should be given back to them to instil moral uprightness and discipline in students”.

Almost 23 years on, we are still debating the possibility of empowering the missions to drive education in Ghana.

President Nana Addo Dankwa Akufo-Addo re-echoed similar sentiments in November 2017 and promised to implement what was in his party’s manifesto.

The challenges at the tertiary level are no different. Currently, lecture halls and residential facilities in public universities are overstretched while more than 400,000 students who complete SHS annually compete for space. Many aren’t admitted because of these and many other challenges.

But private universities offer a great window of opportunity for increased access to tertiary education.

Currently, public universities continue to compete with their private counterparts, even for mature students. This competition is unfair and unnecessary because many public universities are not even able to accommodate the thousands of undergraduate applications they receive annually.

While the National Accreditation Board (NAB) requires PhD as the entry point for university faculty, the reality on the ground is that the country is not producing enough PhD holders to fill our classrooms.

Private universities also deserve allocation of proceeds from the Ghana Education Trust Fund (GETFund) in order to increase access to university education in the country. But that is not what private universities are asking for now, although presidents J.A Kufuor, Prof. J.E.A. Mills and John Mahama offered some of these incentives by supporting private universities with logistics, including, buses, computers and books.

The greatest need today is the scrapping of taxes that are inimical to the development of private universities, while putting enormous pressure on their developmental plans.

Ghana’s transformational agenda requires well-resourced human capital. The only way to do that is to involve the private sector – Ghana’s education entrepreneurs have shown, even outside Ghana, that they have the capacity, given the right motivation.

The writer is the Chancellor, Wisconsin International University College/Immediate past President-General of the West Africa Nobles Forum